8 HVAC History Facts That May Surprise You 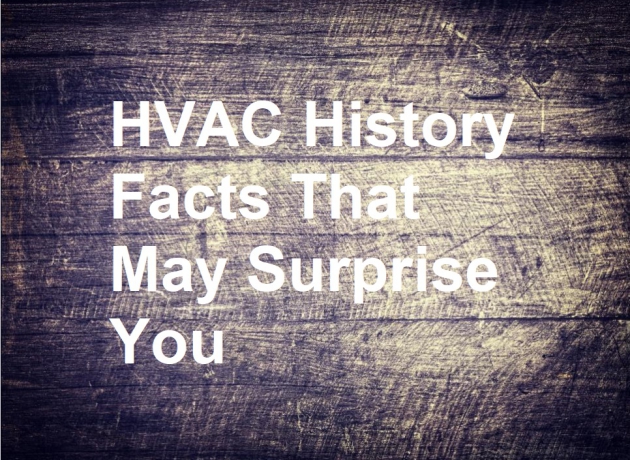 Now that the colder weather is starting to recede into memory, it’s natural to start thinking about the warmer months ahead. Summer is the time to relax and enjoy the weather, but when it becomes too hot, we retreat to the cool of our homes. Living with an HVAC system means that we can enjoy indoor comfort all year round, which is a luxury that most people believe that our ancestors didn’t have. But, the air conditioner has been around for far longer than most of us can imagine. In this article, we will look at eight interesting HVAC history facts.

One of the most basic forms of air conditioning is evaporative cooling. This is an effective method, and in certain areas, an updated high tech variant is used to this day. But, in ancient Egypt, they used an interesting technique that used water soaked reeds to cool a home. The soaked reeds were hung on every window sill, and when the wind blew, it caused the water to evaporate. This made the air around the reeds feel cooler, and the wind would distribute the cooled air throughout the room. The people of the Roman Empire adopted a different approach, and they were famed for their engineering genius. Roman engineers built extensive networks of aqueducts to carry water into cities and this was circulated around rich neighborhoods. This meant that wealthy Roman citizens could benefit from the cooling effects of the water.

In 1906 a North Carolina textile manufacturer coined the term “air conditioning,” which became a catchy marketing phrase as the technology became more affordable. Prior to this moniker, the term “An Apparatus for Treating the Air” was used for the earliest A.C. patents. I think you will agree that air conditioning is a far more descriptive and catchy name.

President James Garfield was wounded by an assassin in 1861, and he was subsequently treated in the White House by his personal physicians. The doctors were extremely concerned about the effects of the summer heat on the president’s wounds. In an attempt to make president Garfield more comfortable, an ad-hoc air conditioning system was built by a group of Navy engineers. This primitive A.C. system worked; it dropped the temperature in the president’s bedroom by 20º. During normal operations, this air conditioning consumed large quantities of ice. Sadly, these efforts were not enough to save the president, and his wounds proved to be fatal a few months after the attack.

Summer is the time when Hollywood studios release those movies with huge budgets to tempt us to buy a ticket. But, did you ever wonder how that tradition began? Movie theaters were one of the first businesses to widely adopt the technology. In fact, the relative cool of the inside of the movie theater was used as a marketing technique to boost summer ticket sales. This worked; ticket sales always proved to be higher in the summer as people wanted relief from the heat. This became a tradition over the years, and that’s why we use the term “Summer Blockbuster” to this day.

When any technology is new, the earliest adopters always pay a premium to be ahead of the crowd. Back in 1931, air conditioning was very new, and only very wealthy people could dream of owning an A.C. unit. One of the earliest A.C. units was invented by H.H. Schlutz and J.Q. Sherman. This air conditioner was designed to be installed on a window ledge to cool the air in a single room. This A.C. unit cost $10,000, but the larger variants to cool big rooms could cost as much as $50,000. When you factor in inflation, those two A.C. units would cost $120,000 up to $600,000 if you were to buy them now!

Back in 1939, Packard became the first American luxury car manufacturer to build an automobile with an air conditioning system. Although this sounds impressive, there were a few problems if you want to use it. Firstly, to turn the A.C. system on, the driver had to turn the engine off, open the hood and then take off the compressor belt. This did work, but it wasn’t a practical option, and it didn’t catch on. That being said, this did place the idea firmly in the public domain, and many advances were made in subsequent years.

Many businesses and offices struggled to deal with the summer heat, and productivity suffered. To deal with this problem, employers allowed workers to take paid vacations when the temperature was at its peak. When air conditioning became practical for business use, it was installed to increase all year round productivity. This worked well; many experts say that the introduction of A.C. systems caused a productivity and population boom in states such as Arizona and Texas. Now people take vacations at times of the year that suit their preferences better. But, the summer vacation persists in many areas of Europe that don’t use large central air systems.

When we think about air conditioning, it’s natural to consider the benefits it brings to our own homes. Indoor comfort all year round is a wonderful thing, but there are many practical aspects to A.C. systems for scientific and research purposes. During the study of pharmaceuticals, it was found that cooled and less humid air improved the results. Medical facilities were quick to notice the connection. It was found that hospitals with air conditioning had lower bacteria reproduction rates which help to prevent disease outbreaks. Even publishing companies found that the cooler air prevented paper expansion and contraction that could ruin paper used in their books.

As you local certified HVAC specialists, we can guarantee that we will install and maintain the most modern heating and cooling equipment.