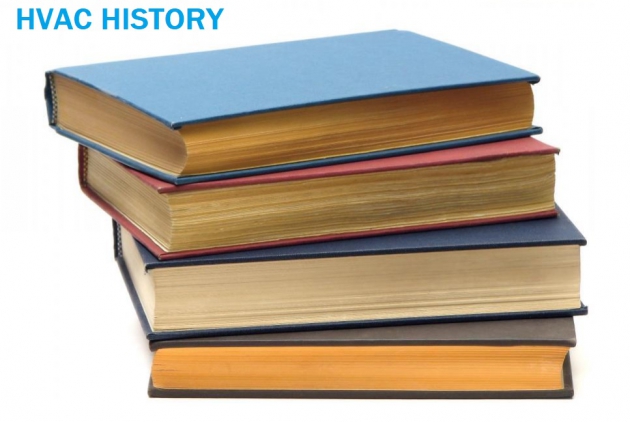 We rely on our HVAC systems to keep our homes comfortable all year round. But, the desire to control the indoor temperatures and enjoy a certain level of comfort is not a new phenomenon. Ever since people started building fires, they have been striving for an improvement that makes their lives easier. As we headed into the industrialized era, pioneers started to take a serious look at overcoming temperature variances using technology. This led to incredible advances in home heating and cooling, and many of those earliest concepts and underlying principles are still in use today. Let’s take a look at eight fun HVAC facts about how home heating and cooling has improved our lives.

Going right back to ancient Egypt, we can see the earliest attempts to tame the savage desert heat and improve indoor comfort. The most basic method of air conditioning is an evaporative cooling process. In Egypt, they would take reeds from the river Nile and place the wet vegetation on their window sills. As the hot wind blew through the home, the water on the reeds would be slowly evaporated. This made the air in the vicinity of the window sill cooler and more tolerable. This concept was later adopted in Ancient Rome, where the water supplied by the aqueduct system would be circulated around the perimeter walls of rich citizens housing to keep those homes cooler. Evaporative air conditioning systems are still in use today, and they are one of the most energy efficient methods available if you live in the right climate.

The 20th President of the United States was James Garfield, and in 1881 he was shot in an assassination attempt. President Garfield survived the initial attack, but doctors needed to keep him comfortable in the White House. At the time, the heat was considerable, so Navy engineers jury rigged an air conditioner system that could lower the temperature in the President’s room by around 20º. This did improve the conditions in the room, but sadly, President Garfield died from his wound some months later.

Back in 1931, there was no such thing as an air conditioner unit for your room unless you were spectacularly wealthy. J.Q Sherman and H.H Schultz invented an early air conditioning unit designed to cool an individual room. This was designed to sit directly on a window ledge, and for the time, it was an effective cooling solution. The problem was the price. Depending on the size that you needed, this air conditioner would cost between $10,000 up to $50,000 at the time. When you adjust these prices for today, they would have cost $120,000 up to $600,000 each!

Packard was well known for its luxury car designs in the 1930s, but they really kicked it up a notch in 1939 when they added air conditioning to certain models. Now, you might believe that this would be a welcome addition for the elite that could afford a Packard. But, in reality, it turned out to be more trouble than it was worth. If you wanted to turn the air conditioning on, you had to pull over, stop the engine, open up the hood and disconnect the belt on the compressor. This isn’t a particularly user-friendly design, but most rich people had drivers to do this work for them, so it was a less painful process than you might imagine. This AC system was effective at cooling the car, but this technology would not be refined and trickle down to the masses until a few decades later.

The earliest public places to have air conditioning installed where movie theaters. At this point, the movies had been popular for a few decades, but as an extra incitement to tempt moviegoers, air conditioning systems were added. This marketing tactic was extremely successful, and it was hard to get a movie ticket during the hottest summer months. This is the source of the “summer blockbuster” releases that we still see to this day!

Before the widespread adoption of air conditioning systems in the workplace, things were very different. Due to a drop in productivity due to the heat, most companies would simply release their staff for a month in summer. This had a massive impact on productivity, and one could argue that the introduction of air conditioning led to the boom in population and success in states like Arizona and Texas. In fact, this summer break concept still exists in parts of Europe were air conditioning is still not installed everywhere. In places like Spain or southern Italy, many companies simply take August as a vacation month.

The original term for air conditioning was “An Apparatus for Treating the Air” which doesn’t really roll off the tongue. After this system was installed in a North Carolina textile plant back in 1906, the owner coined the phrase air conditioner instead. Unsurprisingly this caught on because it was catchy, descriptive, and easier for marketing purposes.

When we think about air conditioning, it’s natural to consider our homes and places of work. But, there are other air conditioning needs outside the understandable need for home comfort. The health industry quickly recognized the value of air conditioning in US hospitals. Doctors discovered that cooler spaces helped to control bacteria and thus slow down the progression of diseases. Researchers working laboratories found that it was easy to track the progress of pharmaceutical testing when the air was less humid. Outside of the medical field, air conditioning systems became popular in many offices. The cooler air did allow for work during hotter months, but it all prevented the degradation of paperwork that would otherwise contract, expand, and become damaged. Remember that offices used to deal with a lot of paper that was stored in filing cabinets and huge archives.

If you need an installation or maintenance work on your modern HVAC system, contact a local specialist today.